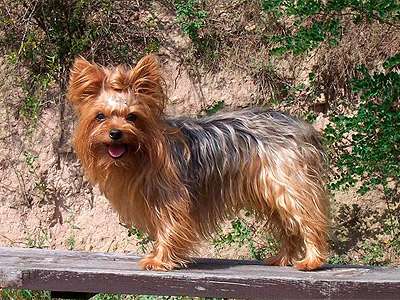 A little dog with a big personality, the Yorkshire Terrier or Yorkie makes an excellent companion. Yorkshire Terriers are classified as a Toy breed, and their small stature means that they do not need a great deal of outdoor exercise. This makes them ideal pets for apartment dwellers. Yorkies are faithful, brave, curious and affectionate, but they also have a feisty side to their characters - they are terriers after all! Yorkshire terriers are not ideally suited as pets for homes with small children.

Yorkshire terriers were first bred for catching rats by weavers in the mill towns of Yorkshire and Lancashire during the mid 19th century. Though small, they were larger than today's standard Yorkie. A famous terrier called Huddersfield Ben appeared at shows all over the UK during the 1890s, and set the standards for the breed. Many present Yorkshire Terrier champions have a strain of his blood in their ancestry, hence his title of "Father of the Breed".

Yorkshire terriers are described as Toy dogs, weighing between four and seven pounds. They stand six to seven inches tall, have v-shaped ears and medium-sized eyes. Their long tails are often docked, although this practice is banned in some countries. Yorkie's coats are long and silky. The body is often a blue-grey colour while the head may be silver or fawn. Colour combinations include steel blue and tan, black and tan, blue and gold and black and gold. Other combinations occasionally arise, but many breeders believe that these indicate potential health problems. Yorkshire Terriers are sometimes recommended as pets for people who are allergic to dog fur, as they shed little hair except when being brushed or bathed.

The strong personality of Yorkshire Terriers means that it is important that they are well-trained in order to prevent them becoming unruly. They are an intelligent breed and easy to train; they love being the centre of attention and many Yorkies seem to enjoy being taught to perform tricks. Because of the far from submissive character of this breed, they are recommended as pets for families where any children are older than age eight. Yorkies enjoy walks and romping outside, but because of their small size will suit many less active owners. They are may sometimes be "yappy" little dogs, but contented Yorkies, whose owners understand and meet their needs, will be quiet and calm.

For showing, Yorkshire Terriers require an elaborate grooming routine to keep their long, silky fur in tip-top condition. The coat is trimmed to floor-length and parted down the centre of the back. The fur of the ears and the feet may also be trimmed. Regular bathing, daily brushing and a monthly treatment with a product such as coconut oil are all needed to keep Yorkies looking their best. On the other hand, many pet Yorkshire Terriers have their coat clipped short all over as this makes grooming a simple matter.

Yorkshire Terriers are prone to problems with their teeth. It is best to clean a puppy's teeth regularly right from the start so that they become accustomed to the activity. Other common health problems include hypoglycaemia, distichiae (eyelashes growing in an abnormal spot), and luxating patellas or slipping kneecaps. More rarely, tracheal collapse, sometimes caused by Cushing's Syndrome, is a serious condition. It can also be caused by the dog tugging at the leash, so vets often recommend a harness for walks.