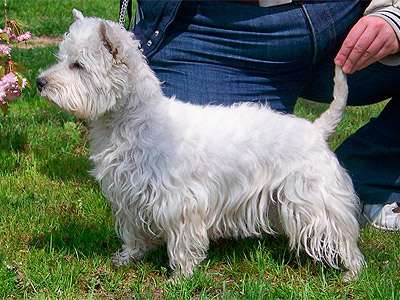 This cute and friendly breed is commonly known as the Westie and has long been a family favourite. This dog is very adaptable and adjusts to new environments easily.

The West Highland White Terrier is a small and sturdy dog with its head in proportion to its body. The breed has a blunt muzzle that is slightly shorter than its skull and features a defined stop. The breed has a black nose with large teeth that meet is a scissors bite. The eyes are set wide apart and a dark brown while the ears are erect, triangular and set on top of the head. Both the legs and tail are short, while the double coat features a hard outer coat and a dense, soft undercoat. As the name suggests, the fur of this breed is pure white.

This breed is particularly easy to train and is very friendly towards strangers and children, which makes it a great family dog. This dog travels well, which means that it can be taken on long journeys if required and is both friendly and lively around other dogs. The breed’s playful nature means that it has a tendency to chase cats and other animals, although this can be controlled with proper training. It is important to establish dominance over this breed so that it does not display behaviour of a pack leader and become snappish or aggressive.

The West Highland White Terrier loves companionship and should be kept in a house or apartment rather than left outside. If the breed is left alone for too long it can become anxious, so constant care is required. However, the breed is very active outdoors and can live either in the city or the country.

While this breed likes to play as much as possible, it also requires a daily walk in order to take care of its exercise requirements. Dogs that do not get regular exercise have a tendency to display behavioural problems. The breed is content playing alone outside if a yard or other outdoor space is provided. The hair of the West Highland White Terrier is easy to groom and rarely sheds. Brushing can be done when needed with a stiff bristled brush, which should also be sufficient to keep the coat clean most of the time. the fur around the eyes and ears should be trimmed with blunt nosed scissors from time to time, while the entire coat requires trimming approximately every four months.