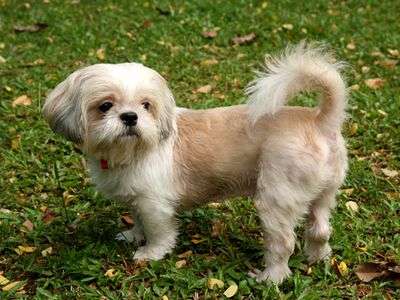 The Shih Tzu, also called the "Tibetan Shih Tzu Kou", "Xi Shi Quan" or in Great Britain called the "Chrysanthemum Dog" is one of the oldest dog breeds on the world. Its name is translated the "Liondog" and got its name from the Tibetan monasteries. In Britain its called the Chrysanthemum Dog, because their head is as beautiful as the bloom of the chrysanthemum.
The Shih Tzu is a crossing between The Pekingese and Lhasa Apso. It is related to the Tibet Spaniel and Tibet Terrier.
This dog breed is probably one of the most popular family dogs. But it is not only their cuteness, but also their intelligence and their character.
According to the FCI, the Shih Tzu is a companion and toy dog, section 5 Tibetan Dog breeds.
In the USA and Great Britian the Shih Tzu is not only a family dog, but also a therapy dog.

The Shih Tzus origin is in the Tibetan monasteries, where the monks wanted to have a kind of liondog. Buddha had a dog breed, which could transfer itself from a dog to a lion, so they also wanted something like that. Of course it was just a legend, because Buddha had a Pekingese. So the monks mixed up many breeds together, to get a liondog, called the Shih Tzu. The first registration is unknown.

The Shih Tzu is a very friendly, intelligent, playful and happy dog, which loves to play, especially with children. It has no problems with other dogs and animals. The owner of this breed does not have to have a big house, a flat is enough. It is very loyal and sensitive, but also independent and viligant. But it does not bark a lot and is never aggressive. It is a good and small watch dog, because of their excellent hearing.
Because of their obstinancy and upright carriage the Shih Tzu sometimes seems a little bit arrogant.
They love to take a walk, but also love to sleep. It has a big relationship to their owners and is, beacause of this, very faithful and gracious. They don´t have a hunting instinct.
Although their small size, they have a good constancy and love walkaways. But it also can stay alone for a few hours.

Shih Tzus have a tough body, although they are very small dogs and their bones are very strong. It is maximum 27 cm tall and their weight is ideal between 4-8 kg.
They have short legs and a long body. Their back is straight and their chest is deep.
Their head looks like the bloom of the chrysanthemum and is ball-shaped and broad. Their eyes are big and dark. The white parts are not allowed to see. Sometimes they also have goggle eyes, but this is not that welcome.
Shih Tzus have a short and broad muzzle. It is almost quadratic.
Their teeth have a small overbite or pincer bite.
They have dropping ears, which are localated very high on their head. The Shih Tzu´s neck is curved and their tail is is appointed very high, so that their tail is over their back. Because of their long hair, the tail is very bushy. They have round paws.
The most specific thing on Shih Tzus is their long and thick hair, they have. Sometimes they also have a little bit curly hair. All colours are allowed. The undercoat is very thick, so the owner has to comb their hair every day. The care of this breed is very time-consuming.
Because of their long hair, many owners make a queue, so that the Shih Tzus eyes are free or they make a short haircut, called the "Puppy cut".
Also very characteristic is their small nose and their short velum. This can also cause health problems, especially with the airways.
Their life expectancy is between 10 and 16 years.