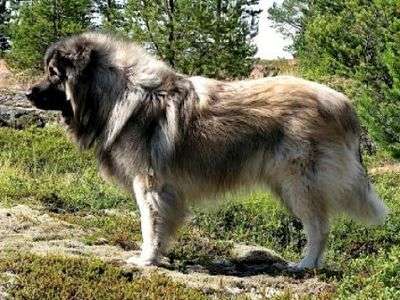 The Sharplanina is a typical herding dog which has its origin in Mazedonia and Serbia. According to the FCI it is localated to group 2, section 2.2. Since 1948 a international standard was developed for Illyrian sheep dogs. The Sharplanina belongs to category B.
The Sharplanina got its name in 1955 as "Jugoslav sheep dog Sharplanina". Since 1968 it is registred as an independent dog breed.
Some references say, that the Sharplanina comes from Tibetan wolfes. Because of this it has a strong protecting attitude.
This dog breed is not easy to educate. The owner of this dog has to be very experienced.
Sometimes it is necessary to go to a dog grooming school.

The Sharplanina is a strong, powerful and big dog breed. It can reach 65 to 75 cm and can weigh between 50 to 60 kilogram. Its fur is long, thick and rough. This is important, because the Sharplanina mainly lives outside. For that it also has waterproof fur.
The fur is coloured in grey with parts of white and black. The mask, the claws and the mucous membranes have to be black. This is a specific detail on this dog breed.
Its ears are dropping and small and its paws are round and strong.

The Sharplanina is a typical herding dog, which protects its owner and flock. This dog breed identifies dangers immediately and analyses them. After that it comes to a decision. It defends his owner and flock with its own life, because this race is very brave. Because of its urge to defend and protect, there is no need of educating it these things. This is is genetically determined.
The Sharplanina is suited to protect houses and big territories.
This dog breed is suitable only for cautious dog owners. The master of this dog has to have a great authority. But you also have to be very careful and not too hard, because an attribute of this breed is its sensitiveness and they never forget bad things, the owner did. You can just say: "Hard shell - soft core".
It is also hard to educate this breed. This is, because the Sharplanina often was alone in the past and was shifted for itself. This is also genetically determined.
The Sharplanina is not temperamental. It is a very vigilant, faithful dog, which is incorruptible. It just listens to its owner. All in one this dog breed is very indulgent.
It is also eager to work, but idiosyncratic, too.
The master of this dog breed has to be very experienced and consistent.