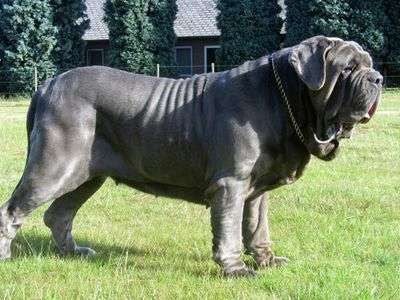 The Neapolitan Mastiff is perhaps one of the most recognisable dogs in the world. It is known primarily by the rather "droopy" appearance of its face and this is complimented by a large size. Due to this unique appearance and a stocky build, this breed is frequently used in private security roles. This is an animal which requires a good deal of attention and skill to train properly. As with most mastiffs, this dog is known to be quite thick and muscular.

One of the defining traits of this formidable animal is that it is extremely protective of its family. It will naturally guard a premises and interestingly enough, it has been known to sneak up on intruders as opposed to barking like many other dogs would. Unsurprisingly, the Neapolitan Mastiff is quite an independent animal and unless raised from an early age, it can be difficult to train. However, owners who purchase a puppy and train it properly will find that it is extremely loyal and caring. A portion of this independent nature arises from the fact that a full-grown mastiff is nearly as large as an adult human; it finds them much less of a threat as other breeds would. It is wise to keep this breed of mastiff away from strangers unless one is absolutely positive that it is behaved; there have been instances where an attack (or even a playful act) can cause injuries. Unlike some other dogs, it can be difficult to achieve a level of superiority and this temperament has made it difficult to enable the Neapolitan Mastiff to be a dog for the home environment.

The exact historical roots of the Neapolitan Mastiff are unknown and it is thought that it descended from a type of dogs known as the Molosser group (in reference to antiquity). Immediately following the Second World War, this breed of mastiff was nearly eliminated. It was not until a breeder established a kennel in Italy (hence the Neapolitan name) that it once again began to flourish.

As can be imagined, training these animals can be very challenging. Forceful methods will not work, as the Neapolitan Mastiff will not consider most humans a threat. Socialisation should occur as soon as possible. If not, there is a risk of the animal becoming rather solitary and it may begin to act defensively against perceived threats (real or not). A new child can present an issue, as the mastiff may not accept it as a part of the family. Additionally, protective training in regards to the owner is necessary. If obedience is not established early, it will be nearly impossible to achieve later in life.

One major issue with the Neapolitan Mastiff is the fact that as its skin hangs loose, it may not be aware of injuries that it has sustained. Thus, it is advisable to regularly check for cuts or abrasions. There are no major health concerns besides those common with other dogs including hip dysplasia, eye issues later in life and obesity. The most important aspect in terms of longevity is to balance activity with a firm form of control. The average lifespan of this mastiff is between seven and nine years.

This can be a challenging dog to own and is not recommended for all individuals. However, it is an extremely loyal breed and its ability to protect its owner by size alone is undeniable. A trainer and breeder should both be consulted prior to purchasing this animal.