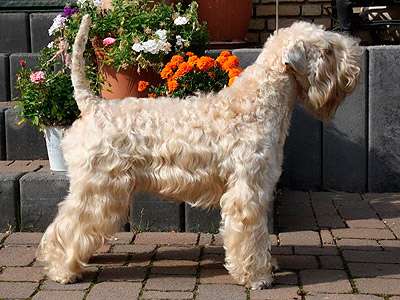 The Irish Soft-Coated Wheaten Terrier originated in Ireland and could be the country’s oldest breed. While its origins lie in a role as a ratter and hunting out other small game, the Wheaten is also suited to a range of roles, making it an excellent all-purpose farm breed.

Due to its humble and common start, the Wheaton simply wasn’t recognised as a breed until 1937, even though it was a quite popular breed.

The Wheaten is a medium-sized breed, standing around 48 centimetres tall. It has a single, slightly wavy coat the colour of ripening wheat. This is dependent on the type, however: the Irish breed has a silky, pale coat, whereas the Anglo-American has a heavier coat.

There can be some health problems associated with the Wheaten. Renal Dysplasia, Addison’s Disease, Protein-Losing Entropy, and Protein-Losing Nephropathy are all present in the breed. While they’re not especially common, anyone looking to acquire a Wheaten should be aware of this and obtain the relevant health checks from a breeder.

Other, more common health concerns are a flea allergy as well as hip dysplasia if the puppy is chronically overfed.

It is a generally robust breed, with grooming and hygiene consisting mainly of using a medium-toothed comb (a brush will make the coat fuzzy) to remove tangles and knots in the coat, the occasional bath, and regular eye and ear checks. Regular brushing of the teeth is also recommended.

The proper socialisation as a puppy will go a long way to ensuring that the Wheaten is a well-rounded, social and stable pet. This will introduce the puppy to a variety of sights, sounds, people and other pets. As it is a family-orientated breed, able to bond with a family rather than a single person, socialisation means that the Wheaten will be comfortable anywhere the family goes. As it is a member of the Terrier family, it loves to chase small, fast moving animals, so a fully-grown Wheaten that has never seen a cat before might see it as fair game!

It is an intelligent, spirited and affectionate breed that can get along well with children, strangers and other pets. A firm, confident owner who clearly communicates acceptable and unacceptable behaviour is essential for a Wheaten. They can be difficult to control when proper boundaries are not established. The terrier in the Wheaten will love to chase, and it is a breed that greets by jumping over a human. While both of these behaviours can be corrected as an adult there are no substitutes for proper socialising and firm, consistent discipline from an early age.

It’s a breed that will do well in most types of homes and circumstances. It is a vigorous breed that needs at least 30 minutes of exercise a day, which can include games, chases and tussles (remember to exercise the terrier in the animal). One word of warning – while the Wheaten’s coat is non-allergenic, it is a magnet for dirt, so this animal will be bringing all of where it’s been home again.

The Wheaten can become destructive or being to bark if left alone for too long, so it’s not a good idea to deprive them of the family’s comfort and attention for long periods. They also love to dig, so be prepared to have to guard the award-winning roses!