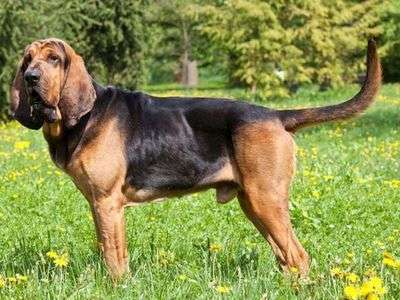 The lineage of the Bloodhound traces back to feudal France where they were used for the purposes of trailing deer and boar. Highly agile and clever, the Bloodhound has a strong sense of smell and is often employed in high-priority tasks like law enforcement and rescue missions. Owing to this fierce background and personality of the Bloodhound, he has often been depicted in the media as a ferocious and doggedly focussed trail dog. However, this only covers about half of a Bloodhound’s true personality.

While it is true that this breed is an indomitable force to be reckoned with, the furrowed hound is, in fact, very gentle and friendly. The Bloodhound is from the Sagaces group of canines, meaning “sagacious.” The word refers to his smartness and ability to sniff out the subtlest targets. The Bloodhound’s skills are so highly valued and well-recognised that their testimony is valid in the court of law. As a family pet, the Bloodhound requires great amount of care and time.

A fully-grown adult male Bloodhound will come to be around 25 to 27 inches tall and weighs 90 to 110 pounds. An adult female is about 23 to 25 inches and weighs 80 to 100 pounds. The Bloodhound has a loose and thin coat. It hangs in wrinkles in the neck and head region. The wrinkles and the loose skin is called dewlap. The dewlap – along with the lengthy, far-reaching ears – helps channel the scent to the Bloodhound's nose and traps it there.

The classic Bloodhound is quite a paradox. He is obedient, yet stubborn; resolute, but not confrontational; friendly, but cautious; and takes a little while to warm up to people he doesn't know. This loveable hound can trace the faintest hint of a scent, but is not the best guard dog owing to his love for humans.

The Bloodhound is an ideal pet for homes with huge yards or farms and is not suited for an apartment lifestyle. Fencing of the yard or farm is mandatory, since the Bloodhound can often be controlled by his olfactory, and his impulse to follow a scent will take over any training or knowledge of danger that he might face on the road. For a similar reason, a leash is a mandatory part of walking your Bloodhound. Once the scent-driven pursuit takes charge, the Bloodhound can run amok, so leash training is required early on. A Bloodhound needs long walks and can walk for many miles. This is definitely a breed for people who like exercise. As a pup, the Bloodhound is curious and clamourous, and crate training is always recommended to aid potty training, as well as to keep your belongings from getting shredded to bits. The Bloodhound is likely to love chewing even as an adult and it is important to supply him with lots of toys and make him understand what is chewable and what is not.

When it comes to training, a Bloodhound is very intelligent and responsive to gentle teaching as well as correction. However, being naturally predisposed to being somewhat stubborn, he will want to resist as and when possible. He might also have a slightly shrewd attitude and seek to gain something out of the training, so positive reinforcement works quite well for the Bloodhound. The most effective training sessions are short – perhaps 15-20 minutes – and should end on a positive note, when the hound has done something praiseworthy.