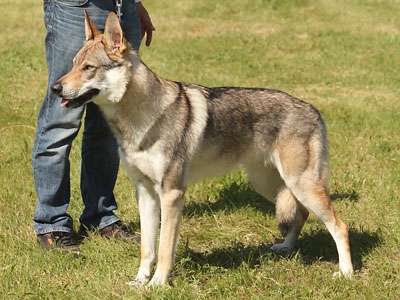 It may look like an untamed wolf fresh from the steppes, but the Czechoslovakian Wolfdog is a relatively new breed. The result of crossing wolves with German Shepherd dogs, in the hope of combining the physical strength and agility of the wolf with the shepherd's loyalty and ease of training, the Wolfdog was originally intended for military and police work, but today the breed is more likely to be found as a companion animal. Wolfdogs rarely bark, being more likely to communicate in grunts, growls, and other quiet noises, as well as with body language, which makes them less suitable for some working roles where clear signals from dog to handler are needed.

The Czechoslovakian Wolfdog is officially recognised by the FÈdÈration Cynologique Internationale, but not by the British or American Kennel Clubs. Following the breakup of Czechoslovakia, it is a national breed of Slovakia.

The Czechoslovakian Wolfdog is similar in appearance to its European wolf ancestors, with large, erect ears, amber eyes, a long muzzle, and a coat of grey and brown with a facial mask and lighter underparts. Its gait is wolflike, with long, loping strides, and it shares some physical characteristics, like late maturity and a long life, with wolves, as well as some behavioural traits, like the use of teeth in play.

Another trait shared with wolves is a strong instinct for pack behaviour. The Wolfdog fares better in the heart of the family rather than isolated for long periods in a yard or kennel, and is very loyal to its pack. This includes children, although some Wolfdog experts believe it is best if the dog comes into a family with children, rather than introducing a new baby to a dog who is established in the household.

As puppies, Czechoslovakian Wolfdogs need a great deal of handling and socialisation if they are to thrive and be happy. They are notorious for bad behaviour in adolescence, as they test their owners’ limits, and can also be difficult to train. An active and intelligent dog, the Wolfdog may not be wilfully disobedient as much as easily bored, with a tendency to lose interest in its trainer and the activity. They need to know, and to be reminded, that their owner is the pack leader.

However, they are a versatile breed, and have been successfully trained for search and rescue and other work. Czechoslovakian Wolfdog owners have trained their dogs in tracking, herding, protection, obedience, and agility. A great deal depends on the temperament of the individual dog and its relationship with its owner, although rewarding with food, and making the training fun, can have excellent results.