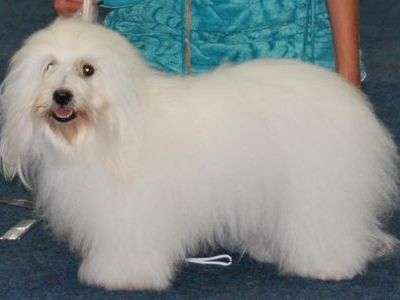 The Coton de Tulear is a small bichon-type breed, with its long, fluffy, cotton like fur giving them the first part of their name. Tulear is a city and port in Southern Madagascar, where the breed is the island's national dog, having been introduced there around the 16th or 17th century. They are sociable dogs who like to please, and have an endearing tendency to jump and walk on their hind legs. They may only be between 9 to 11 inches tall, and weigh up to 13 lbs, yet they are still a robust breed, who although they do not need masses of exercise, are still capable of good hikes. Generally white, or black and white, the Coton de Tulear has a life expectancy of 14 to 16 years, and will produce a litter of up to 8 puppies.

The Coton de Tulear is an affectionate and devoted dog, eager to please. This eagerness, combined with their intelligence, makes them fairly easy to train, and they become great companions. They have a very playful nature, and can be active around the home where they do make excellent pets. They can become very attached to their home, and make good watchdogs, always looking to please their master. Being a sociable breed they tend to get along with other dogs too. This breed has an expression which is hard to resist, their dark, wide-set eyes drawing you in, complementing their friendly nature well.
A pleasant mix of boisterous and calm, this is a breed that should live indoors, and is especially well-suited to apartment living.

Being a low-shedding breed, the Coton de Tulear make good pets for allergy sufferers, and also, on a practical side, mean less hoovering up of dog hair. They still lose hair, though, but instead of shedding it on your carpets the nature of their coat means the hairs get tangled up within the coat instead. Therefore this requires a regular grooming regime, ideally on a daily basis, to prevent the coat quickly matting which may lead to them needing shaving. As well as a daily brush, the Coton de Tulear needs a monthly bathe to keep them in pristine condition.
Although a short daily walk will suffice for exercise, this breed does like to play often, which makes for an entertaining pet. As mentioned, they are capable also of accompanying their owners on a good hike, and love a swim when any water is spotted. They also have good agility skills for the various dog sports and shows, plus are equally proficient playing fetch.

The Coton de Tulear was re-introduced to Europe and America only in the last 20 to 30 years, and gained recognition by the FCI in 1975. On Madagascar they were originally the companion dog of royalty and the wealthy, but finally the wider world is getting to appreciate their charms. It was not until 1990, though, that that the breed was introduced in to the UK, and took until 2014 for the American Kennel Club to recognise the breed.